Lower urinary tract disease is one of the most common conditions affecting felines. Ridding your cat of FLUTD may be as simple as switching him to a raw diet.

Most cats, at some point in their lives, develop lower urinary tract disease. From struvite crystals to urethral plugs, these problems are debilitating, costly to treat, and can even be life-threatening. A range of both conventional and holistic therapies can be used to treat and prevent FLUTD, but one of the most effective is to switch your cat to a raw diet.

Giving your cat a diet based on the principles of evolutionary nutrition (aka raw), means feeding him the way his species evolved to eat over the last 30 million years or so. Unfortunately, during the 20th century, the “cleverness” of modern science started turning many inappropriate ingredients into cat food. The result is that a host of health issues, including FLUTD, have surfaced in our cats.

Nutrition must match your cat’s genome

Modern industrial cat foods have one basic fault: they fail to match the nutritional requirements of your cat’s genome. One manifestation of this fault is the development of urinary crystals, particularly in cats that eat dry foods only.

Apart from being cooked at high temperatures (which destroys nutrient integrity), based on grain, and supplying too much poor quality plant protein, many commercial cat foods contain high levels of crystal-forming material. Additionally, they typically produce alkaline urine, are dehydrating (in dry form), and do not support the protective function of the bladder wall or the healthy development of your cat’s immune system. These nutritional problems, when combined with a genetic tendency to produce crystals, can result in major issues, particularly in male cats in whom urinary tract blockages are not uncommon. 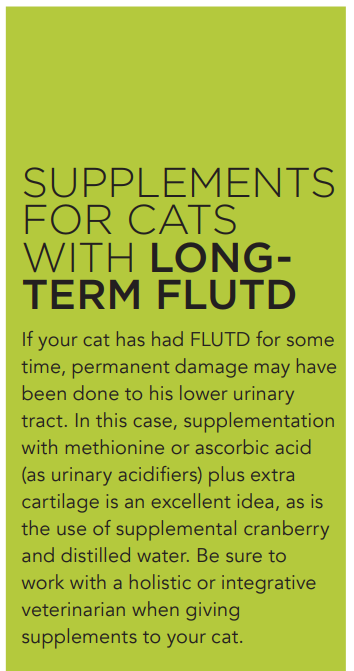 In contrast, real, whole raw food is biologically appropriate for cats; this is the diet that matches your cat’s genome, and that he has evolved to eat. A raw diet ensures optimal (i.e. maximally healthy) functioning, including a healthy urinary tract. Even cats with a genetic predisposition to form crystals will rarely do so when fed a properly-constructed diet based on evolutionary principles.

Even cats with a genetic predisposition to form crystals will rarely do so when fed a properly-constructed diet based on evolutionary principles.

A program of nutrition for FLUTD

We have been successfully using biologically appropriate raw food diets for cats for many years now as part of a successful clinical program to combat FLUTD. Interestingly, this program is not restricted in phosphorus, magnesium or ammonium (protein); no properly formulated diet for cats should be. Such restrictions are not necessary because it is the poorly-formulated, cooked, processed, and grain-based industrial foods that are behind the problem of FLUTD. These (dry) foods produce a state of chronic dehydration, an unnecessarily high pH, a less than optimally-performing immune system and a less than healthy lining (epithelium or mucosa) in the urinary tract.

How a raw diet prevents FLUTD

When a crystal-forming cat is switched to a properly-formulated raw food diet, we note the following:

In short, this raw whole food program is highly suitable for the prevention of crystal formation in most cats, including those that have suffered severe and long-term problems with FLUTD.

I have received numerous letters and emails over the years from people whose cats were crystal producers. They have all reported that switching their cats to a raw diet (either commercially-produced or homemade) eliminated the problem. This mirrors my own experiences as a veterinarian in practice for over 40 years; during that time, I have rarely diagnosed or treated crystals in cats that have been raised and maintained on a properly-formulated raw food diet.

Why Cats Scratch – It’s Only Natural

Can Tui Na help your dog or cat live longer